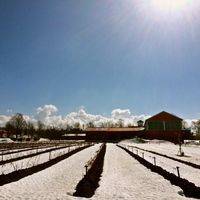 L’ORPAILLEUR, THE STORY OF A QUEBEC VINEYARD

Pioneer Quebec vineyard, l’Orpailleur planted its first vines in 1982 in the beautiful Dunham Valley, one of the most welcoming and wonderful regions in Quebec. Its president, Charles-Henri de Coussergues, also presided the Quebec vintners’ association, from March 2008 to March 2015. He is a forerunner for the advancement of Quebec’s wine industry. He is also the defendant of the implementation and development of numerous laws that aim to make Quebec vineyards thrive in Canada and abroad.

The story of this domain’s wine brings us to the land of an ancient farm near Route 202. That is where Frenchmen Hervé Durand and Charles-Henri de Coussergues, as well as their Quebec counterparts Frank Furtado and Pierre Rodrigue, decided to embark on a career in the world of vine growing. Instead of getting discouraged by Quebec’s sometimes harsh winters, they saw a fruitful challenge. Throughout the years, they have managed to perfect a method which allows them to bring quality Quebec wine to the consumer’s table.

“In this land of rock and weeds, hostile in appearance, we have laid our convictions, determination and love of the profession to draw out a beautiful story which we encapsulate in a bottle year in year out, and that improves over time.”
Charles-Henri de Coussergues, wine grower