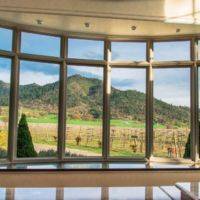 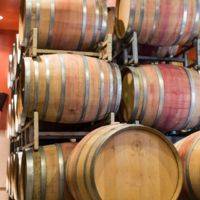 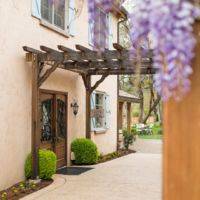 Troon Vineyard, established in 1972, is located in the heart of the Applegate Valley AVA, the southernmost appellation in Oregon. Situated halfway between Grants Pass and Jacksonville, just off of Highway 238, Troon Vineyard is the Applegate Valley Wine Trail’s most popular winery destination, with our beautiful Mediterranean-style tasting room, covered stone patio, and grassy picnic area. In 2009 we opened our Willamette Valley tasting room in the charming historic town of Carlton. Both locations boast a friendly and knowledgeable staff that makes winetasting at Troon a great experience.
One of the first grape growers in Southern Oregon, and home to the region’s earliest planting of Zinfandel in 1972, we now grow more than 20 additional varietals on over 40 planted acres: among them is our award-winning white varietal, Vermentino, and the uncommon red grapes Malbec and Tannat, along with Syrah, Cabernet Sauvignon, and Tempranillo. We also produce several unique blends, including Oregon’s most popular red wine blend, Druid’s Fluid.
Troon Vineyard has always been farmed using sustainable practices, employing the best possible agriculture procedures. We currently hold a LIVE (Low Input Viticulture and Enology) Certification and Salmon Safe endorsement. Named one of Wine Business Monthly’s ‘Top 10 Hot Brands’ in 2012, Troon Vineyard has earned hundreds of awards and accolades during our more-than-40-year history.
Whether you’re a member of one of our wine clubs, are visiting us for the first time, or are a southern Oregon resident who tours the Applegate Valley regularly, we invite you to stop in and experience the best, most interesting wines of the region.

When viewed through the lens of hindsight, Dick Troon was a visionary – though it may not have seemed quite so at the time. In 1972, there were a number of new-world wine regions paving the way for what was fast becoming a thriving American wine industry. None of them were in Southern Oregon.
A few acres in the Applegate Valley, a small number of vines, a bit of iconoclastic stubbornness and a grand idea would be the foundation for today’s most popular Southern Oregon winery in the Applegate Valley AVA. Here on the Kubli Bench, Dick Troon selected 32 choice acres where he could take advantage of maximum daily sun exposure, warm days and cool nights, at just the right elevation to grow his favorite varietals of Cabernet Sauvignon and Zinfandel.
Over the years Dick Troon tried and missed, and tried and hit. He liked to tamper and experiment. Not all of his wines were great, but some were exceptional. Because of that innovative spirit, now, more than 40 years later, we are working with a comprehensive understanding of the wines that can be coaxed from this incomparable place.
In 2003, Troon decided it was time to hand over the reins and let the winery begin a new era. Larry Martin was a friend and fishing buddy who shared Troon’s passion for fine wine and the Martin family became his choice to take over. Troon Vineyard was reborn: a beautiful tasting room was built, larger and more modern production facilities established, new vineyards planted, and a diversity of varietals were introduced to become a permanent part of our program that was forged by Troon’s pioneering nature.
We welcome you to Troon Vineyard, and invite you to try our wines and visit our estate. Here in this special place you will experience firsthand what compelled Dick Troon to put down roots, as well as what motivates us to continue to innovate and set the standard for viticulture in Southern Oregon.

Stephen Hall – Winemaker
While one can, and certainly should, partake of official viniculture study, much of what makes a great winemaker is inherent, and can’t be learned. Creativity, confidence, an exceptional palate, an understanding of climate and geology and agriculture, a willingness to take risks and at the end of the day be judged and critiqued: these are the characteristics one wants in their winemaker. Though he is, in fact, officially schooled and technically trained, Steve brings all those traits to Troon.
Joining the team in March of this year, Steve is in charge of all production and vineyard operations. He most recently hails from Robert Biale Vineyards, Napa’s famed Zinfandel producer, and has an impressive resume that includes some prestigious brands. Fortunately for us, it now also includes Troon.
“I am excited about the unique growing conditions of Southern Oregon,” Steve says. “It’s refreshing to work in a wine region that is still writing its story.”
Keep your eye on this one, because we know that once that story is written, some of it will be about Steve.

"Thanksgiving Wines and Then Some" 2009 Cab Franc Wineormous.com Nov 2011

"On Earth Day, a toast to Northwest wineries going greener with an option to refill bottles" The Oregonian April 2011

"B.Y.O.B. at Troon: Winery allows people to fill their own bottles on Thursdays" AllBusiness.com July 2010

Dick Troon, who planted our vineyard in 1972, always had a fascination for the Druids of long ago & their place in his Scottish heritage. We present this pleasing blend of Merlot, Syrah, Cabernet Sauvignon & Zinfandel as your perfect entertaining or nightly wine. A cool, late Spring delayed the harvest. Even, warm weather throughout the Summer & Fall helped ripen black fruit. Black cherry & blackberry make up the aromatics. The Zinfandel adds a bright, zesty quality, while the Merlot & Syrah seem to give it depth & richness. Smooth texture with hints of vanilla & pie spice. Alcohol Content: 13.5%

Co-fermented a unique field blend of Malbec for its intensity of fruit, and Tannat with powerful and embracing tannins. Well structured and youthful, promising great drinking for many years. Incredibly aromatic with classic lavender and iris floral notes combining with intense wild raspberry and allspice, lower registers of artisan chocolates and a double espresso aroma. Rounded powerful wild strawberry / ripe peach fatness; broad and mouthfilling secondary tones of camphor and blood orange, with deeper savory notes in the finish.

Fermented in one ton punch down bins for almost four weeks. ML took place in newer French oak barrel s, where the wine was aged for 18 months prior to bottling. Plum jam and currant aromas mingle with cumin and sun dried tomato; on the palate layered textures reveal deep savory flavors of black plum and black cherry, crushed fennel seeds, and in the finish cumin and turmeric tones carried by elegant tannins.

A meatier, more savory rose than previous the two vintages, offering a bouquet of strawberry and cherry with a wisp of olive and earthy spice. Bright, crisp acidity creates a mouthfeel of ripe peach with a finish that almost mimics a deep red wine with a bold tannic structure.

Harvested the Zinfandel and Tempranillo together on Oct 1; treaded the clusters in their half ton bins to release color and flavors from the skins before gently pressing the clusters. Racked off solids to a tank for fermentation and kept the wine on lees until early December, for a slow and steady cold ferment. The wine was then brought to cellar temperature to finish ML fermentation in a classic rose manner. Welcoming aromas of Cherry blossom and rhubarb mingle with bright flavors of strawberry and juicy watermelon. A nicely balanced acidity frames a wonderful mouthfeel, resulting from malolactic fermentation

Harvested the Vermentino and Sauvignon Blanc together; treaded the clusters in their half ton bins to release color and flavors from the skins before gently pressing the clusters. Racked off solids to barrels for fermentation and kept the wine on lees, stirring every month. A mix of wild yeast and a Rhone yeast were used. A small portion from a tank fermentation lot of Vermentino was blended in to lift up the lemon tart and zest of lime aromas. Beautiful high tone aromas of passionfruit, pear, lemon tart & almond croissant. Flavors of jasmine, ginger and thyme, fresh baked poppy seed cake, lime zest drizzled with orange blossom honey.

The name Longue Carabine is our nod to the pioneers that came west and settled the Oregon Territory in the 1800’s. It was the rifle that made it possible for them to cross the country escaping hostile outlaws as well as providing food and protection for their families, as they made their way into an unknown world. Harvested the vineyard blocks in late September thru mid Oct; treaded the clusters in half ton bins to release color and flavors from the skins, then gently pressed the clusters. Racked off solids to barrels for fermentation. Kept the wine on lees, stirring every month. Natural ML fermentation took place in barrel. Aromas of warm honey, ripe peach and sun dried apricot; secondary aromas of coconut cream pie and wild thyme. Huge ripe peach and apricot flavors blend with watermelon and candied ginger in a long, crisp finish.