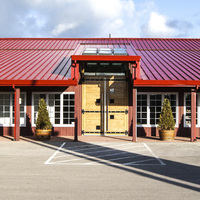 Since arriving in Niagara, Canada in 1948, the Pillitteri family has been committed to creating a legacy for generations to follow. Now, over six decades later, Pillitteri Estates Winery proudly continues a family tradition of viticulture and winemaking excellence. With three generations actively involved with our winery’s operations, we can truly say that each bottle of wine we make is a product of our family’s passion. We are proud to be able to share the fruits of our labour with wine enthusiasts around the world, and consider each person that enjoys a glass of Pillitteri wine to be a part of our family.

The story of Pillitteri Estates Winery begins generations ago in the heart of old world Sicily. Grape growing was the way of life for the Pillitteri family in Racalmuto. Growing up on the family farm, Gary was soon responsible for helping his father and grandfather with the harvest and the tending of the vines.  In 1948, Gary, at the age of 12, and his father, set off to establish a new life for the family in Canada. They settled in the Niagara area and shortly thereafter were joined by the rest of the family.

In the summer of 1957, Gary was introduced to Lena Agro, a young girl whose family was from the same town in Sicily as the Pillitteri family. On June 18 of 1960, Gary and Lena were married. Their family soon flourished. They welcomed their first born, Connie, on September 23, 1961. They welcomed their second child, Lucy, on February 23, 1963 and they welcomed their third child, Charles, on August 2, 1964.

On December 15, 1965 Gary and Lena Pillitteri settled in Niagara on the Lake to raise their family. They purchased a small fruit farm on Niagara Stone Road. The land was planted to tender fruit (peaches, cherries, pears, plums, prunes, apples, and grapes) and vegetables and in 1973 they opened Gary’s Fruit Market (which actually still operates today in the east wing of the winery).

Over the years, the family owned “Gary’s Fruit Market” grew into a bustling destination of interest for visitors to Niagara-on-the-Lake and locals, as did the interest in wine from Niagara. Soon after the first Niagara wineries opened, Gary took the initiative to begin planting wine grapes and started the first of the family’s Niagara vineyards.

By 1988 Gary decided to experiment by making a small batch of Vidal Icewine. The Icewine was later entered into a wine competition where it won a gold medal. This achievement solidified the idea to open a winery in Niagara’s newly emerging wine industry. During the next 5 years the farm and the market underwent several changes to convert the property into a winery. Ready for business, on June 5, 1993, the winery opened with a capacity to produce up to 16,000 cases. Through hard work, the wines began to achieve many awards, nationally, and as well on an international level.

For Gary Pillitteri, the opening of Pillitteri Estates Winery in June of 1993 was the culmination of a lifetime dream. Since arriving in Canada from his native Sicily in 1948, and through many years as a grape grower in Niagara and amateur winemaker, his goal had been to open his own winery.

The turning point took place five years earlier when Gary won a gold medal for his Icewine in Niagara’s amateur wine competition. He knew then that he could make his dream come true. But he had been thinking about early retirement and could only build a professional and high-quality winery with the expertise and full commitment of his family.

Pillitteri Estates Winery is truly a family enterprise: Gary’s son Charles is C.E.O. President of Sales, daughter Connie is C.F.O President of Operations, daughter Lucy is C.M.O. President of Marketing, son-in-law Jamie Slingerland is Director of Viticulture while grandsons Richard and Jared are the V.P. of Sales and Export Manager respectively.

The grapes are harvested primarily from the family’s vineyards of just over 100 acres in Niagara-on-the-Lake, planted with vitis vinifera and French Hybrid grape varieties. Following the exacting standards of the VQA (Vintner’s Quality Alliance) production has increased steadily since the winery’s opening, and currently stands at 100,000 cases. The winery’s production facilities have recently undergone a major expansion, although growth in production is carefully controlled to ensure that the family’s high quality standards are maintained. Today our winemaker Aleksandar Kolundzic is known to craft fresh aromatic white wines and deep age worthy red wines to please most palates.

Pillitteri Estates Winery has won over 800 wine awards from both local and international competitions. Many of our most prestigious awards are on display in our gallery at the entrance to the winery. In addition to wine awards the winery has received high praise from wine writers the world over. We are extremely proud of all the recognition we receive as it is a testament to our winemaking philosophy and our vision for the continued growth of the Ontario wine industry. In addition to wine awards we have received industry and government recognition which we are equally proud of.